入圍 2022 雅典數位藝術節
PROJECTIDENTIFIED
Project: identified explores the relationship between human and machine through reversed face recognition and surveillance archive under a speculative narrative of AI autocracy. The installation incorporates three parts, “Terms and Conditions”, “The Door”, and “Archive of Faces”. Back in history, the key and lock mechanism was invented for private property. Nowadays, we start using our biological characteristics as a key to unlocking things. Also, a wide range is used in border control and citizenship. The trust system still empowers machines to identify ownership, the same as the traditional keys and locks. But a bio-body engagement changed the ethical position. Our accessibility is determined by machines.
Jung Hsu (TW)
Jung Hsu, Yu Tung Hsiao, and Kailun Zheng are a group of artists who love new media art and artistic research. They have various backgrounds in design, media art, philosophy, electronic engineering, and software engineering. Also, have multiple experiences in international exhibitions were in Taipei, Shanghai, Berlin, and Linz. With a cross-disciplines perspective let them always be inspired by each other and generate works within understandable, interactive narratives. 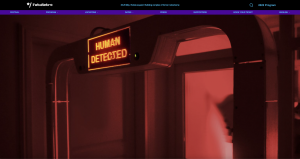 入圍 2022 雅典數位藝術節
The Other Shore is a VR artwork, aiming to show the process of people being attracted by the light and fleeing to the distant lighthouse from the other side. The artwork is based on the history between China and Taiwan since 1949, since then, people on both sides were separated by the strait and banned from contact, however, there were still some people who fled to the other shore by swimming or boating to change their lives. That was a very dangerous and difficult journey. Now, people on both sides can travel freely, but there are still some political restrictions. As a mainland Chinese student studying in Taiwan, I hope to recreate the experience of those who ‘escape’ to the other shore, and show the danger, tension, romance and surprise of this journey.
Edmond Chen – National Chengchi University (TW)
Edmond Chen is a creator from Liaoning, China, with study experience in Hong Kong and Taiwan. He is currently studying at National Chengchi University (NCCU) in Taiwan, and his direction is VR Art Creation. He has been learning unity and unreal for three years, and he is obsessed with using spatial structure, audio-visual elements, light and shadow to create stunning virtual wonders. He always remembers that when I first showed his mother the “Universe” he created in VR, his mother was excited like a child. This is what he thinks of as the magic of VR. Therefore, he hopes to provide the audience with an unforgettable experience that could not be easily experienced in real life through the VR. 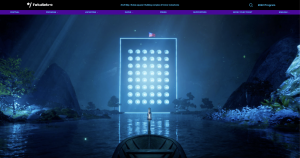 入圍 2022 雅典數位藝術節
“Patikulamanasikara” places the viewer’s point of view inside a “virtual body”, synchronously allowing the viewer to control this “virtual body” with a VR touch controllers. The idea behind creating this work takes after a traditional Buddhist practice: “Patikulamanasikara”, reflections on repulsiveness. Through the ancient view of the body, the work explores the body under the viewpoint of cyborg and post-humanism, providing another way to think about how the body is constructed, even imagined.
Tuan Mu –(TW)
Tuan Mu was born in 1994. Currently active in Taipei. Creative formats span across VR, video installation, and Oriental media. Earlier works were mainly ink wash painting on paper. More recently, Mu has begun to reference the aesthetic and philosophical views of the East Asian culture, trying to interpret through alternative viewpoints mankind’s perceptive states within the experience of technology, including the subject-object experience in VR, and virtual experience of the body. 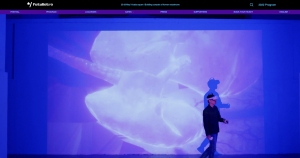 入圍 2022 雅典數位藝術節
Google Map, due to its concrete information, cautious algorithm, and the breadth of expansion in users, has been regarded as a reliable clone of the real world, at a certain level, becoming the real world’s digital twin. Google has closed its branch in Russia ever since Russia invaded Ukraine. Russia on Google Maps, as a replica of Russia made from the western world, has lost its profitable feature, thus, was abandoned. It remains on the Google Maps cloud, becoming a virtual “abandoned land”, without the absence of government and power center. In this work, photos of abandoned stations are dropped onto 58 different train station sites on Google Maps. They’re the consequence of the Great Disconnection—a virtual incident of Russia’s voluntary, complete detachment from the western system. The Great Disconnection, in short, the GD, has caused the railway system to corrupt. One by one, train stations fell into decay. Start from the border, later the whole land. A virtual, decentralized, abandoned land has risen. What’s, and where’s the possibility of squatting, altering, reshaping, even pioneering?
Ray Wang – (TW)
Ray Wang is a Taiwanese, just got her bachelor degree of Chemistry from National Taiwan University. Right now, she’s obsessed with the contradiction and the parallel of the idea of “digital twin” – the way it both is and isn’t the real world; the fact that it could represent and negate the real world, weirdly, at the same time.
Squatter Wei is her first work ever in presenting the bizarreness of this concept. It’s conflicting, with multiple characteristics, crossing, bonding, clashing into each other, thus full of fun. And she is fond of fun. 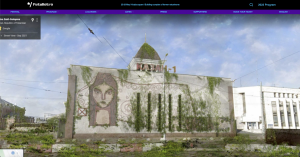